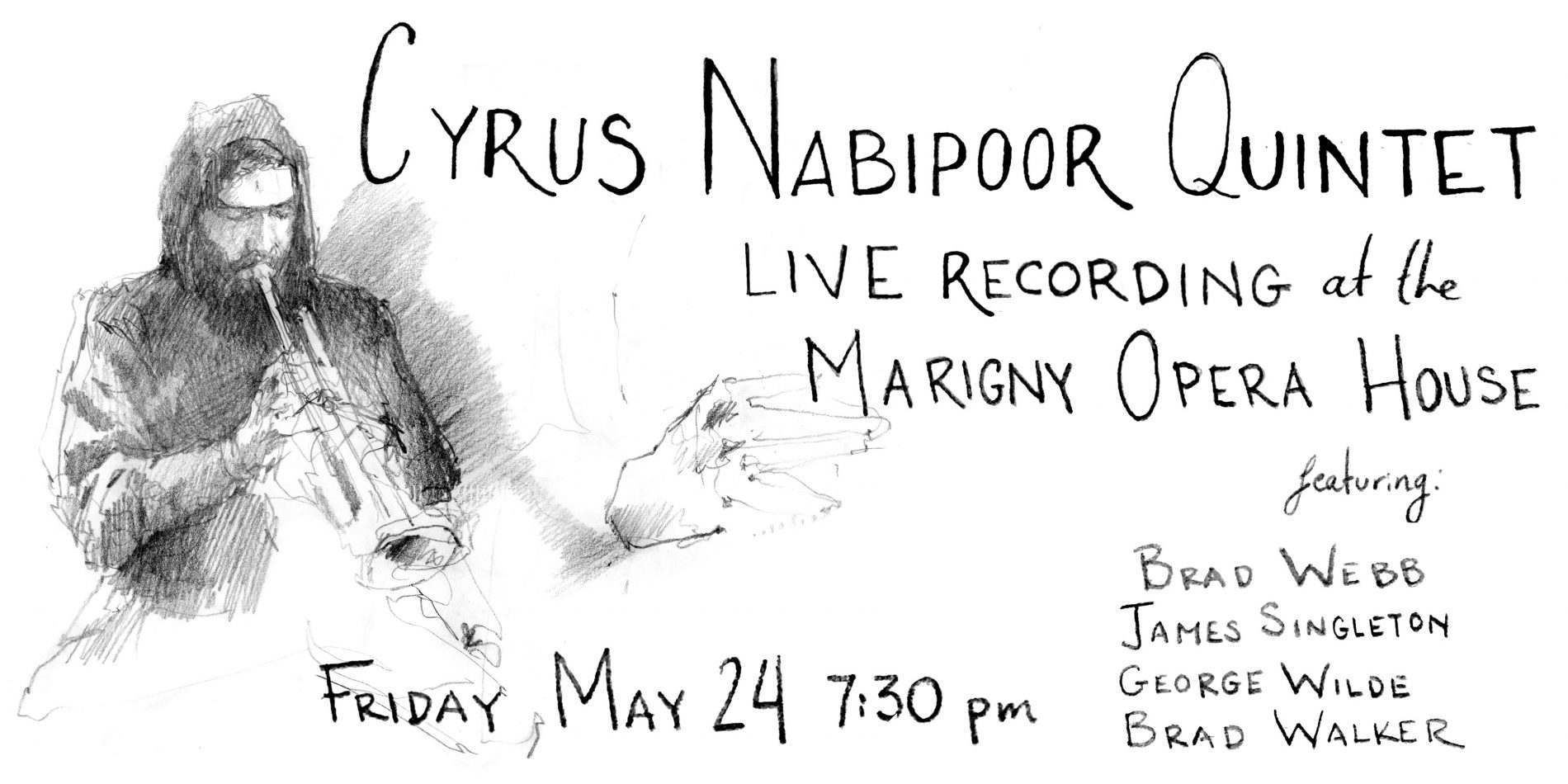 A regular at the Opera House, Cyrus has performed here with his quintet, Outer Core, and for Ethan Stern’s Hanukkah Bonanza. Anyone who’s been inside knows that the acoustics are incredible. Some people also know that musicians tend to play better with an audience! All this to say that when Cyrus started planning his debut record as a bandleader, the choice was obvious.

“As a New Orleans-based transplant by way of Portland, Oregon, Cyrus Nabipoor finds himself at the crossroads of the rich history of his chosen instrument and the endless possibilities wielding it can provide. The young trumpeter, composer, educator, and bandleader is rapidly accruing a who’s who of local talent as his list of associated acts, ranging from numerous styles of jazz across its history to funk and its groove-laden offshoots, rock, experimental improvisation, and in many cases, a mixture of the above. He’s equally adept and gaining ground in mastery of the trumpet as a pure acoustic medium as well as an electronically mediated source of soundcraft. Expect to hear more and more from this up-and-coming artist regardless of where in the world you find yourself.”
-Nick Benoit

Cyrus was born and raised in Portland, Oregon. He began playing trumpet in middle school because a trombone wouldn’t fit on his bike, and he’s sure glad he dodged that bullet. As an adolescent he was taught by Cynthia Plank and local trumpeter Derek Sims. In high school he joined the Alan Jones Academy of Music, where he learned how to stop playing stupid shit (mostly). Cyrus holds a Bachelor of Music from Loyola University New Orleans. He graduated magna cum laude and was awarded outstanding undergraduate in both Jazz and Brass. While there, he studied with Nick Volz, Tony Dagradi and Jimbo Walsh. Cyrus also spent a term at the Grieg Academy in Bergen Norway studying with ECM legend Per Jørgensen and Martin Winter (principal trumpet, Bergen Philharmonic). He regularly returns to Norway, where he has ongoing collaborations with Simen Kiil Halvorsen, Roar Kjeldahl Berntsen, Arne Fjose Sandberg, Petter Asbjornsen & many more. Cyrus is a frequent collaborator of Pacific Northwest beat-making-duo Korgy & Bass. He is a co-founder of Lore, a multimedia storytelling performance improv series, with visual artist Ida Floreak.