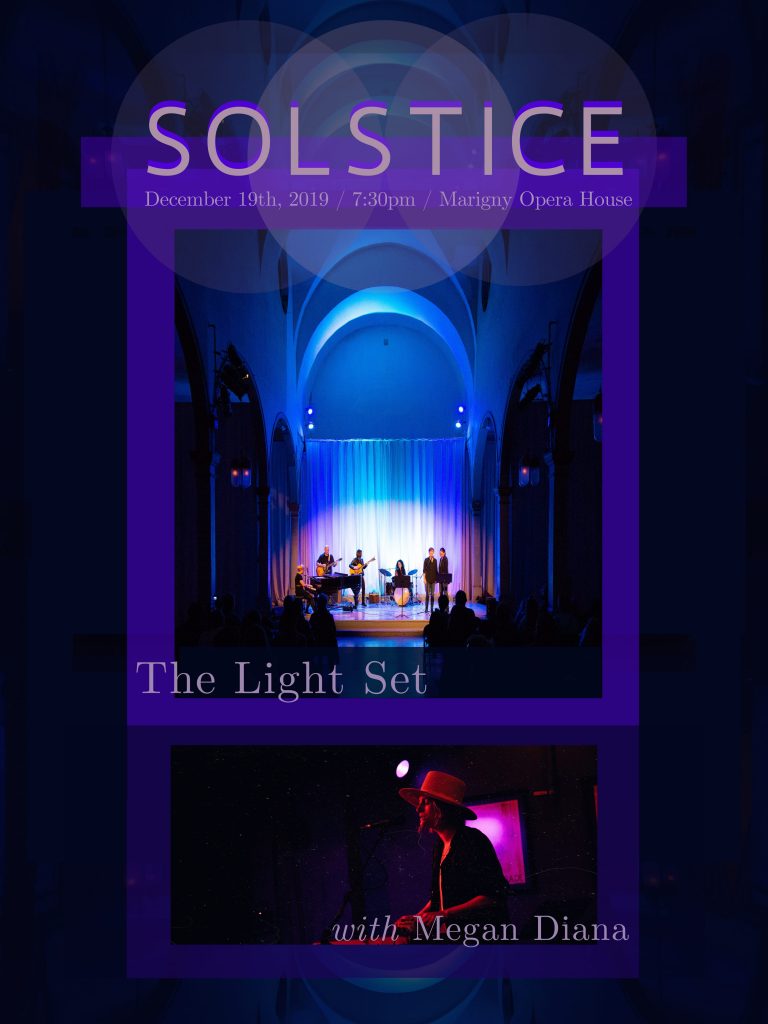 For the Winter Solstice, The Light Set takes its biannual journey exploring the turning of the seasons. You are invited to join for a celebration of songs that reflect on the light and darkness within us all.

Megan Diana from Portland, OR., will be opening the show with her thoughtful, catchy indie pop tunes.

House doors open at approximately 7:00PM
Suggested Donation: $15 GA / $10 Student, Senior
*None turned away for lack of funds, no pressure*

The Light Set:
The Light Set, a chamber folk-pop outfit, formed in New Orleans in 2016. The chorally influenced six-piece group sings harmony-drenched, reflective narratives. Their debut EP, “Diving,” was released in September 2018, and was described by The Gambit as “crashing waves of harmonies… delicate arrangements, wistful recollections of love and regret that build into life-giving hymns.” Their semi-annual Solstice show at the Marigny Opera House was also recently lauded as “catharsis through sad songs sung beautifully.” Find them at @thelightset on Instagram and Facebook or at thelightset.com

Megan Diana:
Songwriting driven by vintage keyboards, Megan Diana loves a Wurlitzer and Fender Rhodes – especially when put thru an echo pedal. She layers her lush voice in choral layers – going atmospheric at times and then all at once back to the center of her chest in a whisper. Her record allows her to bring in her French Horn in equal parts Canadian Brass and Chet Baker (if he played the F Horn). Some songs lean towards Dark Americana Noir, others clearly constructed pop-  with a full band (and new her pedal steel player) things start to turn Western Flavor Florence Welch and have given life to her new genre – DREAM COUNTRY DISCO