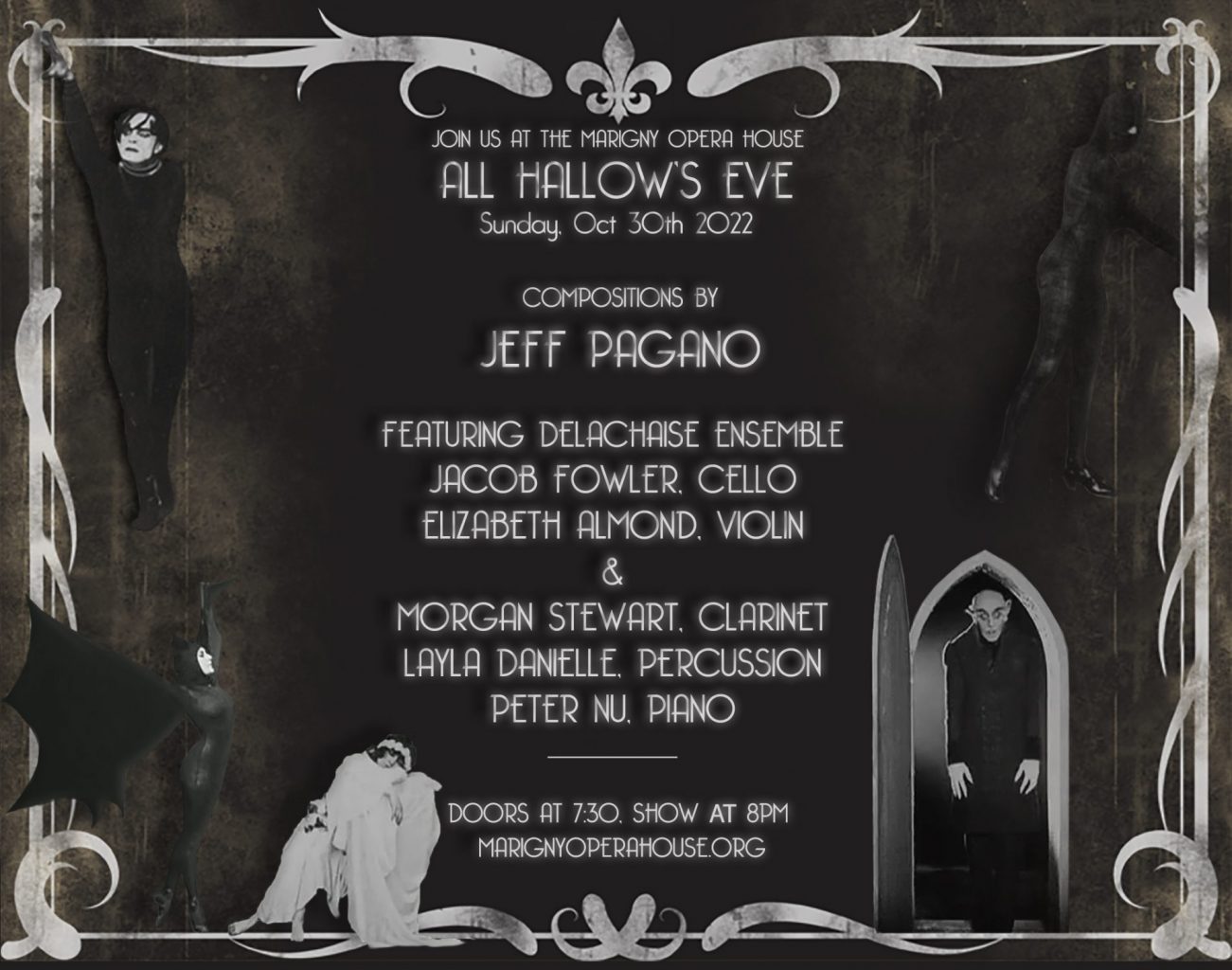 None turned away for lack of funds, no pressure.

Join us at the Marigny Opera House for an All Hallow’s Eve of haunting compositions and songs inspired by Silent Horror Films written by Jeff Pagano performed by musicians of Fever Candlelight concerts.
Halloween costumes encouraged 👻

Composer and pianist Jeff Pagano began performing piano at churches in his hometown of Memphis where he continued his education at the University of Memphis. He relocated to New Orleans and continued his musical education under organist and composer Albinas Prizgintas, who studied with the renowned French composer/organist Olivier Messaien. Pagano has scored the music for many films and plays, including the score for a play of Mary Shelley’s classic Frankenstein. His composition, “Songs for Sylvia Plath” was featured at the Sylvia Plath symposium, commemorating the 50-year anniversary of the release of Ariel.

Jacob Fowler is a New Orleans-based cellist who is the Founding Director of the Surf and Sounds Chamber Music Series. Fowler frequently performs with the Houston and San Antonio Symphonies, Louisiana Philharmonic Orchestra, and regarly for the Fever Candlelight concerts. He is also a Festival Artist at the Crescent City Chamber Music Festival in New Orleans.

Violinist Elizabeth Almond Crute Cunha is the Co-Director of the Crescent City String Academy. As an orchestral musician, Elizabeth has performed with the Louisiana Philharmonic Orchestra, Rapides Symphony Orchestra, Northern Neck Orchestra, Asheville Jazz Orchestra, and more. She has performed with popular artists including the Trans-Siberian Orchestra and Sarah Brightman, and appeared in Showtime’s On Becoming a God in Central Florida. Elizabeth currently performs regularly for the Fever Events Candlelight Concerts series throughout New Orleans.

Clarinetist Morgan Stewart is an active musician and music educator with a Master of Music degree in clarinet performance from Loyola University New Orleans, performing with various chamber groups in the Greater New Orleans area. She has collaborated with Grammy nominated producer and composer Khari Mateen.

Layla Danielle is a New Orleans based percussionist and educator. She studied percussion at East Carolina University and U.F.P.E in Recife, Brazil. After graduating with a B.F.A in music education, she began to teach percussion ensembles across eastern North Carolina. Since relocating to New Orleans in 2011, Layla has played with brass bands, volunteer orchestras, composers, variety shows, original folk musicians and continues to teach private music lessons and Band in New Orleans.