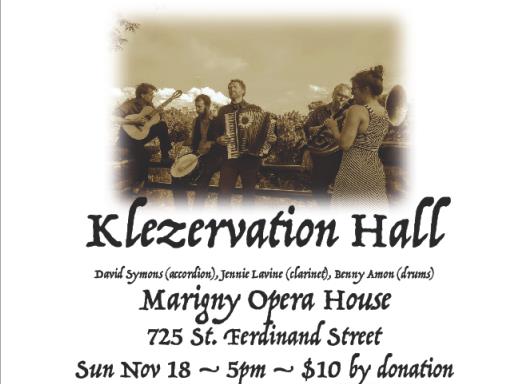 Music lives and breathes, and in certain magical moments it brings back to life, allowing past and present to intermingle. Klezervation Hall brings  music from a mix of sources, old and new, perhaps the most exciting of which are early 20th century transcriptions from Jewish folk musicians in the Ukraine collected by the Soviet ethnomusicologist Moshe Beregovski (1892-1961 Kiev, Ukraine). These are exciting both for their provenance and because they lend us the opportunity to renew music that, without these writings, might have been lost a century ago. Dobriden, good day. Stay awhile and travel these roads with us.

Jennie Olshina Lavine is a clarinetist and composer, performing in New Orleans and throughout the country.  Her life and music travel on the diaphanous threads that connect the bygone sounds of the shtetl, the vibrancy of the New Orleans musical world, and the living voice of Jewish prayer.  Her work and studies as a Jewish community leader and hazzan infuse her sound.

Benny Amon is one of the most in demand drummers on the New Orleans Jazz Scene regularly performing at Preservation Hall, the Palm Court Jazz Cafe and aboard the Steamboat Natchez.

Accordionist, singer, and composer David Symons has founded and led many bands, including Black Sea Quartet, Inner Fire District, The Salt Wives, and The Brass Balagan. He has written and directed music for theater, is the sole proprietor of the Big Squeezy Accordion Repair Shop, and is a founder of the New Orleans Accordion Festival.