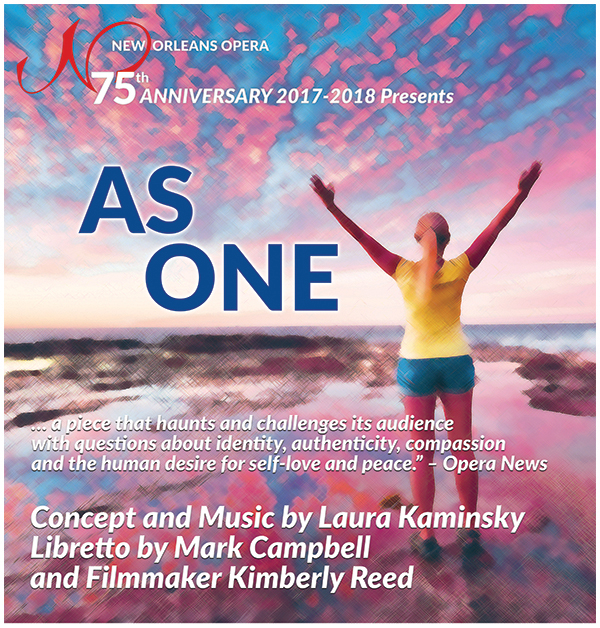 With humor and empathy, As One chronicles a transgender person’s inner journey.
This new, 75-minute chamber opera depicts the experiences of its sole transgender protagonist, Hannah, as she endeavors to resolve the discord between herself and the outside world. Two singers, a baritoneand a mezzo-soprano, both portray the character Hannah. Inspired in part by the life experiences of acclaimed filmmaker Kimberly Reed, As One’s rich libretto – and evocative melodies and harmonies – make it an unforgettable work. Performances: Friday June 2nd and Saturday June 3rd at 8:00pm; Sunday June 4th at 2:30pm.

“The opera hits the core issues every human being has to confront: Who am I? How do I become myself? What struggles I have to go through? How do I have honesty? How can me changing effect the people and the world around me? – It’s specific about Hannah, but also a human story everyone can relate to. That’s the beauty of the libretto, Hannah is breaking down a lot of barriers.” – Laura Kaminsky, Composer

“I wanted to let you get to know a real, live trans person. It’s not unusual for me to be the first transgender person someone has known. I’m happy to be in that position, because the best way to dispel misunderstanding and increase empathy for The Other is to simply get to know someone. ” – Kimberly Reed, Co-Librettist

“Kim recalled an incident as a male-assigned youth in Helena, Mont. Like almost every boy born into a suburban existence, Kim had a newspaper route. But one morning, she decided to deliver newspapers in a blouse worn under her jacket. It was a galvanizing moment. We discussed a few more experiences, and I left that evening with a vague but thrilling notion for a story.” – Mark Campbell, Co-Librettist

“The popularity of As One is very gratifying. Even more gratifying to us is how the opera’s message about human rights is reaching so many people—especially at a time when leadership in this country wants to dehumanize trans people and strip away their rights.” —Laura Kaminsky, Mark Campbell, Kimberly Reed

As One is a chamber opera in which two voices—Hannah after (mezzo-soprano) and Hannah before (baritone)—share the part of a sole transgender protagonist. Fifteen songs comprise the three-part narrative; with empathy and humor, they trace Hannah’s experiences from her youth in a small town to her college years on the West Coast, and finally to Norway where she is surprised at what she learns about herself.

Part I
In “Paper route,” Hannah rides around her suburban neighborhood delivering newspapers and revels in her more feminine impulses. Her youthful challenges in conforming to gender norms are related in “Cursive,” “Sex ed,” “Entire of itself.” and “Perfect boy”—in such disparate subjects as handwriting, sex, a John Donne poem, and exemplary male behavior. However, in “To know,” she discovers that she is not alone in the world and seeks to understand about herself at a local library.

Part II
During her college years, Hannah struggles with her bifurcated existence in “Two cities,” but also encounters the joy of being perceived as she wishes in “Three words.” In “Close,” she has made the decision to undergo hormone therapy and briefly suffers its vertiginous effects before feeling at one with her own body. “Home for the holidays,” “A Christmas story” and “Dear son” all occur around the Christmas season and relate Hannah’s growing distance to her family and her past, which is countered by an immediate connection with a stranger in a local café. In “Out of nowhere,” Hannah escapes a harrowing assault that prompts her to find a link to the larger trans community and end her self-imposed alienation. Reacting to the conflicting voices in her head, she finally resolves to escape in the fragment, “I go on to…”

Part III
“Norway.” In this extended aria, Hannah finds, in Nature, solitude, and self-reflection, the simple yet surprising equation that will help her achieve happiness.

Tickets are available for General Admission at $40

A Special Patron Cocktail Reception with the Composer for $100

use coupon code: asone on the checkout cart page.

This production is generously underwritten by Drs. Emel and Ranney Mize and The Harter Foundation

Commissioned, developed, and produced by American Opera Projects at BAM