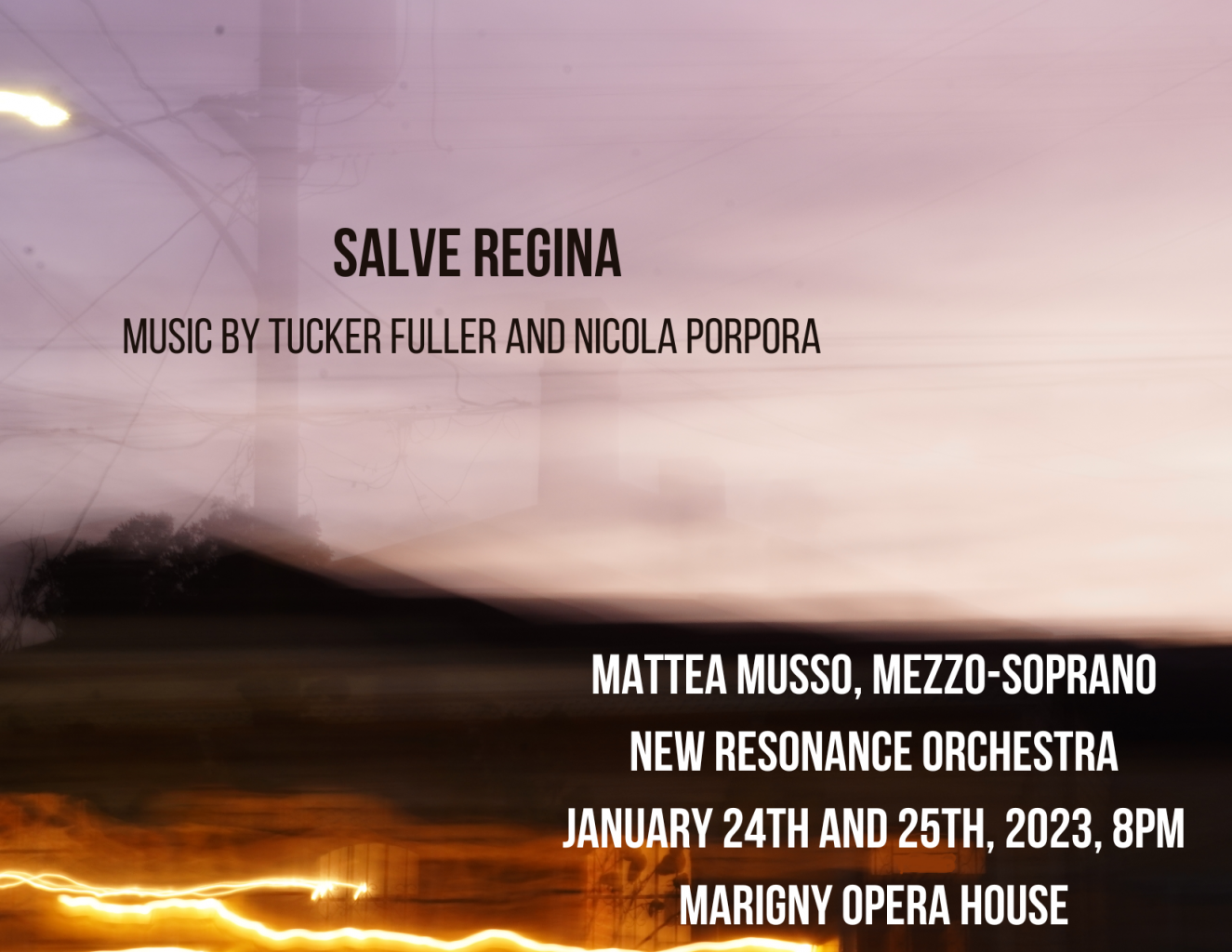 Box office will be handled by the New Resonance Orchestra – Click Here for tickets [ newresonanceorchestra@gmail.com ]

“To you we send up our sighs…in this vale of tears.” In its five sections, the medieval devotional text “Salve Regina” brings the listener on an emotional and psychological trajectory alternating between serene devotion and agitated yearning, profound anxiety and ethereal grace. In this program, New Resonance Orchestra pairs two imaginative musical settings of this prayer, a 1730 setting by the Italian baroque composer Nicola Porpora and a 2014 setting by New Orleans composer Tucker Fuller. Given the almost 300-year gap between the two compositions, the stylistic contrast is immediately evident, but juxtaposing the two settings offers an opportunity to experience the aspects of this prayer that continue to reverberate through the centuries. At the same time, Porpora and Fuller offer deeply personal responses to the text in their respective settings. Interspersed between these settings, New Resonance Orchestra, under the direction of Francis Scully, presents a selection of baroque instrumental music by Antonio Vivaldi, Biagio Marini, and Claudio Monteverdi.

This concert is particularly special because it marks the return of Italian mezzo-soprano Mattea Musso to New Orleans. Ms. Musso, a specialist in Renaissance and Baroque music, lived in New Orleans from 2013-2014 and collaborated with the Marigny Opera House and New Resonance Orchestra on several memorable concerts of early music, including the 2013 performances of Claudio Monteverdi’s Vespers of 1610. Musso’s passionate music-making and thoughtful performances of rarely heard musical works at the Marigny Opera House helped put the nascent arts venue on the New Orleans cultural map.

Musso’s sojourn in New Orleans culminated in the performances of Tucker Fuller’s Salve Regina in December 2014. The Marigny Opera House commissioned the piece by Fuller specifically for Musso’s voice and the piece won the 2014 Gambit award for “Best New Classical Music Presentation.” “This concert celebrates a really special time in the New Orleans music scene when Mattea lived here,” notes New Resonance music director Francis Scully. “Mattea had this amazing connection with audiences at the Marigny Opera House and I’m so excited that we have the opportunity to hear her sing this beautiful Salve Regina again. We’ve also included some rare pieces by composers that Mattea and New Resonance helped introduce to New Orleans audiences.”

Mattea Musso is an Italian mezzosoprano and pianist. Her singing repertoire covers the baroque and renaissance styles as well as traditional music from the Mediterranean. In her extensive musical career, she has sought to harmonize popular and classical music whilst remaining faithful to the origins of both. This unique style creates a link between her native country and the rest of the world. She has collaborated with numerous eminent musicians in the early music scene, including Alan Curtis, Marina Comparato, Peter Phillips, Jordi Savall, and Federico Maria Sardelli. She currently lives in Buenos Aires, Argentina and was recently awarded the prestigious National Musical Critic Award “Premio Estímulo” from the Association of Argentine Music Critics.

Tucker Fuller (b. 1980) was born on a farm near Ellendale, North Dakota. Since arriving in New Orleans in 2010, Tucker has written a number of award-winning ballets, song cycles, and symphonic works for the Marigny Opera House/Ballet, New Resonance Orchestra, and the Louisiana Philharmonic (among others). He studied composition with composers Joan Tower, Christopher Theofanidis, Evan Chambers, Bright Sheng, and Michael Daugherty, and holds degrees from Bard College (B.A.), Peabody Conservatory (M.M.A.), and the University of Michigan (D.M.A).