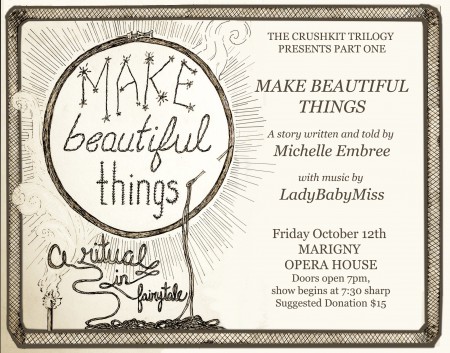 by Sharon O’Brien
At CC’s on Esplanade Avenue, Francis Scully is reflecting on a range of topics – from his singular approach to classical music to the special challenges of being music director for the Marigny Opera Ballet’s “Giselle Deslondes.”
What’s particularly refreshing about Scully is the breadth of his vision and his willingness to leave the confines and silos of traditional classical music to engage and create with dance companies, theaters, and visual artists.  As he sees it, “with classical music, we need to stimulate our own creativity. It’s really exhilarating to connect with artists in other disciplines. It moves us forward to the next thing. It helps us think in different ways.”
Ultimately, “our goal is to reach new listeners. We’re telling them ‘this music is about you, it touches on your concerns, and it’s made by people like you.’ We’re not messing with the music of great composers, but we are saying that the listener is the hero.”
In many ways the antithesis of twentieth century conductors like Toscanini, Scully thinks of conducting differently. “It’s a larger umbrella than just waving the hands. It encompasses all sorts of administrative things, pre-concert planning, creative strategy and curatorial functions.  You know, I think a lot about how to respond to the challenges of being a conductor in 2016. Maybe this isn’t just about music, but also this idea of collaboration. . . . “
Scully didn’t have a classical music background growing up. He listened to rock, letting himself free range through different musical eras and genres, coming to classical music in his teens.  Like others of his generation, he benefitted from technology that disrupted the old ways of listening to music.  Prior to digitalization, music was strictly classified and categorized by type, genre and delivery mechanism (e.g., live, radio, record stores, tape).  “These categories – socially and from an access standpoint — are disintegrating.  If you have the interest in say Balinese music, you can find it. “
The Norfolk, VA native studied violin in public school and went on to an undergraduate degree in violin performance from Catholic University and a master’s in conducting from the Peabody Conservatory of Johns Hopkins University. After graduation he landed an internship with the Berlin Philharmonic and traveled through Europe listening and learning. “I first went to Berlin in 2000.  I wasn’t there in the 1990s, but there was this sense of a huge upheaval all at once.  Artists were there, experimenting, throwing off all of this creative energy.”
A 2007 trip to visit his parents in New Orleans became another inflection point.  “Getting off the plane from frigid Berlin, I went straight to a Mardi Gras parade in 70-degree weather.”  What he felt in New Orleans was a blast of the creative energy he’d experienced in Berlin.  Then, there was the chance to be part of rebuilding the city after the storm. “It felt like a place that was uniquely open to experiment at that moment.”
No surprise then that Scully’s first project was a Post-Katrina piece, Aaron Copland’s “Appalachian Spring.”  It seemed to answer questions he always asks himself about his work, “How do you celebrate what’s happening here?  How do you express the spirit of this community? The Idea is always to connect classical music with whatever’s going on. . . .  We have to come up with a good reason for why in 2016 are we doing this.”
More than just a conventional concert, this 2008 “Rebuilding Appalachian Spring” was a multimedia show with actors, dancers, video projections and the debut performance of his New Resonance Orchestra. The composition of New Resonance, which draws from the ranks of LPO, NOCCA faculty and freelance professional musicians, varies with each production.  And so do Scully’s collaborators.  For “Haydn Seek,” Scully’s June 2016 production at Marigny Opera House, he partnered with Goat in the Road Productions to literally bring in the clowns for chase scenes and broad physical comedy in eight Haydn symphonies.
Was the 18th century Austrian composer rolling in his grave? Scully doesn’t think so. In an interview with Dean Shapiro in The New Orleans Advocate, he explained that somewhere in the 1760s and 1770s, Haydn started the practice of using symphonic music for theatrical performances, possibly even for comedy interludes in between the acts. Scully also finds evidence that seems to indicate that Haydn was thinking about theatrical gestures and timing. “So it seemed like we could put together a fun program of some of these really unusual works that are specifically theatrical and add our own little touches to it.”
Scully’s association with Marigny Opera House dates to 2009 when it was still Holy Trinity Church, a deconsecrated neighborhood place of worship soon to be acquired by Dave Hurlbert and Scott King. Since then, Scully has been a frequent collaborator with Hurlbert, Tucker Fuller, and others on a dazzling variety of productions.
For “Giselle Deslondes,” Scully thinks of himself as sort of the second level in the creative process, following what composer Tucker Fuller and choreographer Maya Taylor have already devised.  That said, the challenges are ample. “We’ve never heard this piece before. No one hears it until the very first night of rehearsal with the orchestra.
“The ballet company has been working with computer generated music for rehearsals and does not experience the full orchestra until a week before opening. So there are different tempos, different sounds from what the dancers are accustomed to.  So, how can I put this together — how I can take what everyone else has already contributed and make it work. That’s my challenge now.”
You can hear the New Resonance Chamber Orchestra at the world premiere of “Giselle Deslondes” featuring choreography by Maya Taylor and score by Tucker Fuller  November 17-20 at the Marigny Opera House.  http://www.newresonanceorchestra.org/